Over the last decade, cyber security has rapidly become a concerning problem. Rightfully so, given how a cyber-attack can compromise an organisation’s key functions and processes within a matter of seconds, exposing sensitive data to opportunistic criminals.

The impact and severity of cyber-attacks can be exhibited by a report from Cybersecurity Ventures, who predict that cyber-attacks will cost the global economy a shocking $6 trillion per year by 2021.

Which Country Has the Highest Number of Significant Cyber-Attacks?

Specops Software analysed the latest data from Center for Strategic and International Studies (CSIS) to discover which countries across the world have experienced the most “significant” cyber-attacks between May 2006 and June 2020.

“Significant” cyber-attacks are defined as cyber-attacks on a country’s government agencies, defence and high-tech companies, or economic crimes with losses equating to more than a million dollars.”

Significant Cyber Attacks Per Country: The Results
Specops Software found that the United States of America has experienced the most significant cyber-attacks, totalling 156 between the period of May 2006 and June 2020. In this time frame, 2018 was the worst year for cyber-attacks, with 30 incidents alone occurring throughout the year.

One of the USA’s most recent breaches, in May 2020, was brought to light by the National Security Agency (NSA), who found that Russian hackers were exploiting a bug in a commonly used email server to infiltrate sensitive data from American organisations.

Following the USA is the United Kingdom who have experienced the second-highest number of attacks between May 2006 and June 2020. Our research can reveal that the UK experienced 47 cyber-attacks classified as “significant” during this time, which included the large-scale cyber-attacks deployed across the Labour Party’s digital platforms during the 2019 general election.

India ranks in third place, falling prey to 23 significant cyber-attacks. In their latest cyber-attack, in June 2020, the country experienced a high-profile attack where malware was deployed against nine human rights activists to log their keystrokes, record their audio, and steal their personal credentials.

Australia has had the sixth highest number of cyber-attacks between May 2006 and June 2020, with 16 recorded during the period. The most recent compromise was announced in June 2020 by their Prime Minister, Scott Morrison, who said government agencies and essential businesses/services were being targeted by large-scale sophisticated cyber-attacks. 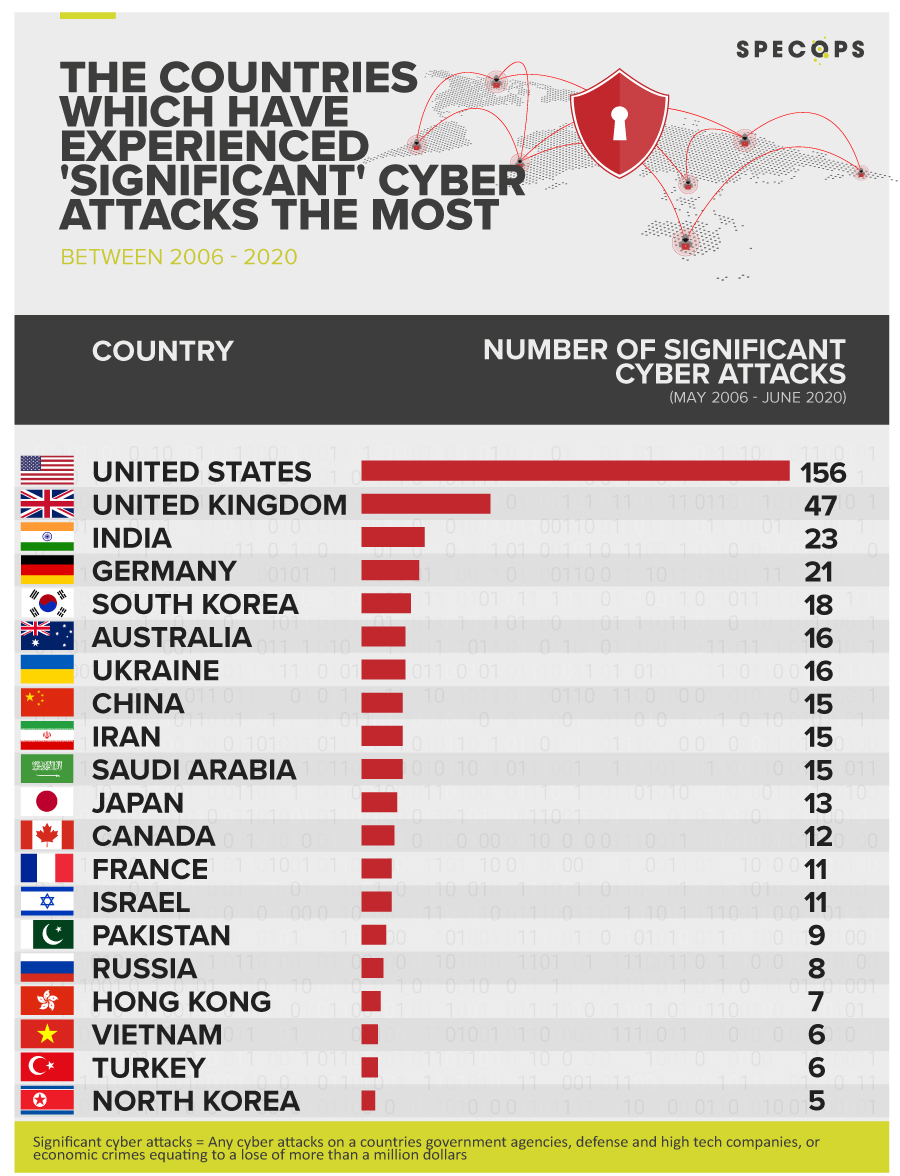 The Techniques Most Commonly Used to Cause Significant Cyber Attacks

A DoS attack occurs when a cybercriminal makes a machine or network resource unavailable to its intended users by overwhelming it with requests until normal traffic cannot be processed normally.

An SQL injection is a malicious SQL code inserted by cyber criminals into a database to access sensitive information that was never intended to be displayed.

A MitM attack happens when a cybercriminal intercepts communication between two parties through a range of online avenues such as email, social media and web browsing. The purpose of a MitM attack may involve eavesdropping on communication, hijacking password credentials, spying on victims, or modifying traffic between parties.

Phishing is a cyber-attack practice where cyber criminals send emails that appear to be from trusted entities, but are in fact a fraudulent attempt to gain authentication details from victims such as login credentials, payment information, and personal address.

Specops Software analysed each entry made by the Center for Strategic and International Studies (CSIS) in their record of significant cyber-attacks between May 2006 and June 2020, and for each case identified the country which was targeted/affected by the cyber-attack in question. Once this was done, the results were carefully tallied to identify the total number of significant cyber-attacks each country had experienced and then put in rank order from highest to lowest (from this, the top 20 countries were taken).