At the 2019 Geneva International Motor Show, Bugatti announced our 110th birthday present to ourselves, the reimagining of the original Bugatti Baby. We are delighted to say that the design and testing phase is now completed, the car has gone into series production and clients will be soon be taking delivery of the very first cars. Developed in partnership with The Little Car Company, the Baby II has been described by those who have had the opportunity to drive it as ‘more of an unruly teenager than a Baby’.

While all 500 cars were accounted for just three weeks after last year’s show, some clients have had a change in circumstances due to recent global events, meaning a very few build slots have become available and will be allocated on a first come, first serve basis. Please visit https://bugattibaby.com/ for more details.

An authentic tribute to the original, but with added performance
The original Bugatti Baby was born in 1926 when Ettore and his son Jean decided to build a scaled-down Type 35 for Ettore’s youngest son, Roland, on the occasion of his fourth birthday. Ettore and Jean had intended the present as a one-off car, however the feedback from customers visiting Molsheim was so positive that the Baby went into production and was sold between 1927 and 1936. Cherished by Bugatti enthusiasts worldwide, today no collection is complete without a Baby. However, with only around 500 ever made, they have been the preserve of the lucky few.

While the original Bugatti Baby was a 50% scale version of the car that brought Automobiles Ettore Bugatti to fame in the 1920s, the Bugatti Baby II offers more in terms of size and considerably more in terms of performance. Eight-year olds would struggle to fit in the original half-scale Baby, whereas at 75% scale and designed for ages fourteen and above, the Baby II has definitely become more of a young adult. 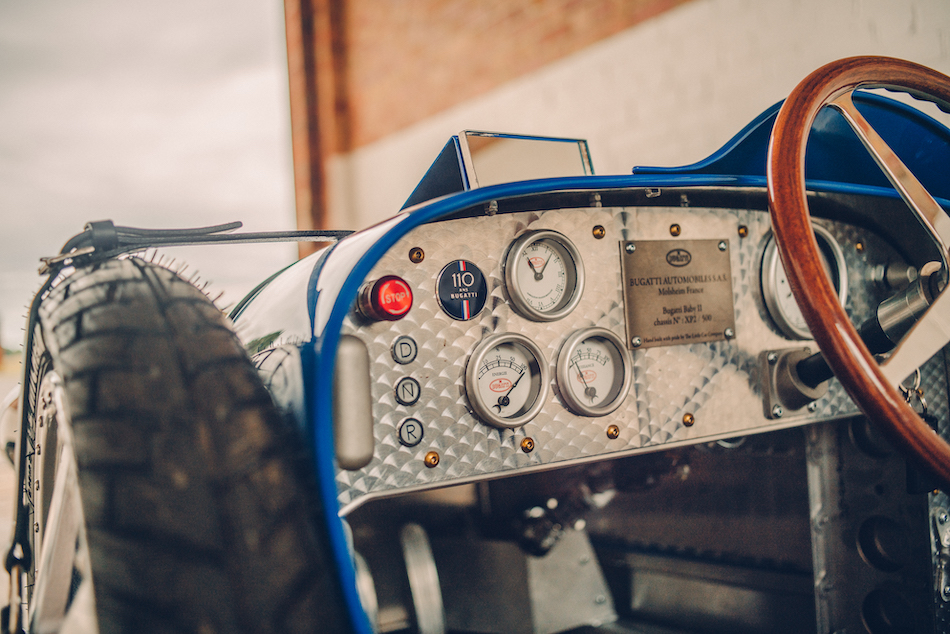 “Ettore Bugatti himself was already interested in catering to the children of Bugatti enthusiasts and designed the Type 52 miniature car as a genuine Bugatti. That was a sensation at the time,” says Stephan Winkelmann, President of Bugatti. “We are continuing this tradition with the new edition of the Bugatti Baby II, and I am delighted that we have found The Little Car Company, a partner that shares the same values as us. With the Bugatti Baby II, we invite a young generation of enthusiasts to fall in love with the wonderful world of Bugatti.” 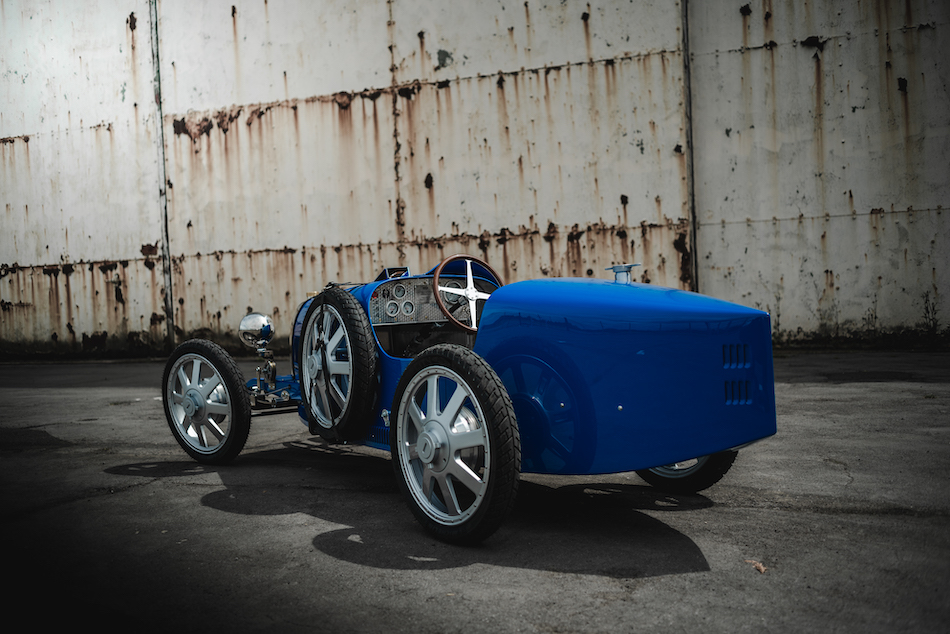 The Vitesse and Pur Sang versions include the Novice and Expert driving modes, but also offer extra performance from an upgraded powertrain, unlocked by the legendary Bugatti Speed Key. This enables you to deploy up to 10kW (13.4 bhp) and with an all up weight of just 230kg, the Vitesse & Pur Sang models will try and spin their rear Michelin tyres from standstill, on the way to a 70kph (42mph) top speed. Depending on the weight of the driver, 0-60 kph is dispatched in just six seconds.

When it comes to range, the lithium ion battery packs combined with regenerative braking will also surprise clients used to the original Baby. When driven carefully, the Base model can achieve 25km of range on a single charge. The larger battery pack in the Vitesse & Pur Sang models doubles that, meaning a driver can achieve more than 50km, though not if they decide to unleash the full performance of the Baby II. And if that’s not enough? The replaceable battery packs can be swapped out in a matter of seconds so the fun can continue.

When it comes to handling, the Baby II is completely true to its mythical predecessor, the Bugatti Type 35. Based on a digital 3D scan of an original Lyon GP car with identical geometry and suspension, the handling is as authentic as an enthusiast could hope for. The only nod to modernity is the introduction of adjustable dampers, allowing clients to tailor the handling in ways not possible in the Type 35’s heyday. Bugatti Test Pilot, Andy Wallace, was even involved in the final development of the tuning and setup of the Baby II. In addition, key elements of chassis refinement even took place at the famous Prescott Speed Hill Climb, home of the Bugatti Owners Club. https://www.youtube.com/watch?v=bXi7T_qk3Fc 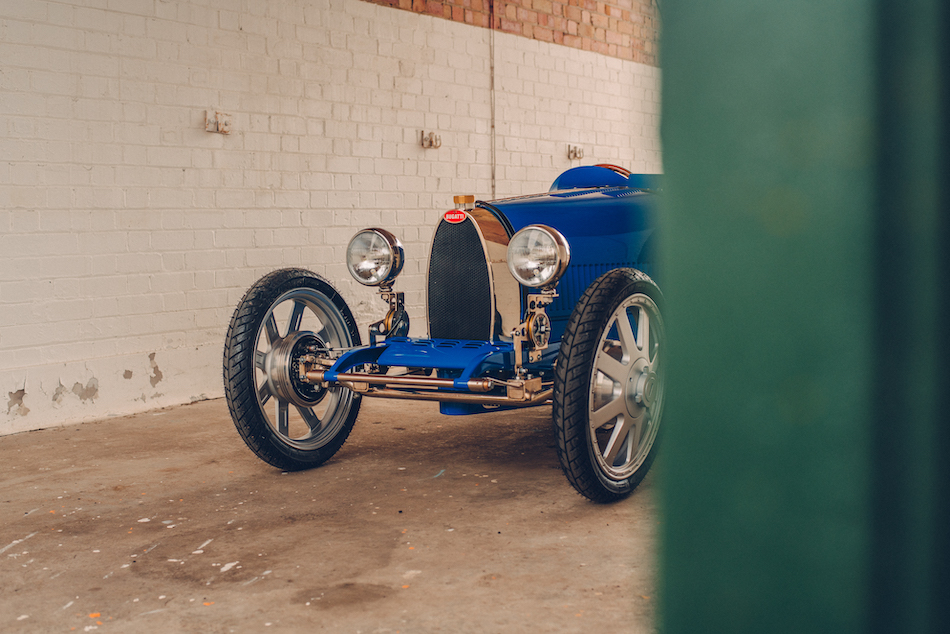 Other features which will appeal to enthusiasts include faithful working replicas of the original Type 35’s instruments, with some adaption for modernity. For example, the fuel pressure gauge has now become the battery gauge and in a nod to the Bugatti Veyron, the oil gauge has transitioned into a power gauge. The scale replica of the famous four spoke steering wheel now has a quick release to make access to the cockpit easier. The adjustable pedals are machined from solid aluminium billet and proudly display Bugatti’s famous “EB” logo, while the fuel pump handle has been exactly reproduced, but now serves as the forward, neutral and reverse selector.

The turned aluminium dashboard is as present and correct as it was on the original Type 35, and custom ‘EB’ switches operate the LED headlights in sidelight and main beam modes. Finally, proudly displayed on the nose of each car is Bugatti’s famous ‘Macaron’ badge, made of 50g of solid silver, an exact 75% replica of the badge on the Chiron.

The car can even be customised in multiple colours for both the exterior and interior, including the exact same solid shades available on the Bugatti Chiron, and an online configurator is available to play with on the BugattiBaby.com website.

In addition, all owners of Baby IIs will receive membership of The Little Car Club and the Bugatti Owners’ Club, and be able to attend events where they, their children and grandchildren can drive their cars at famous motor racing circuits. 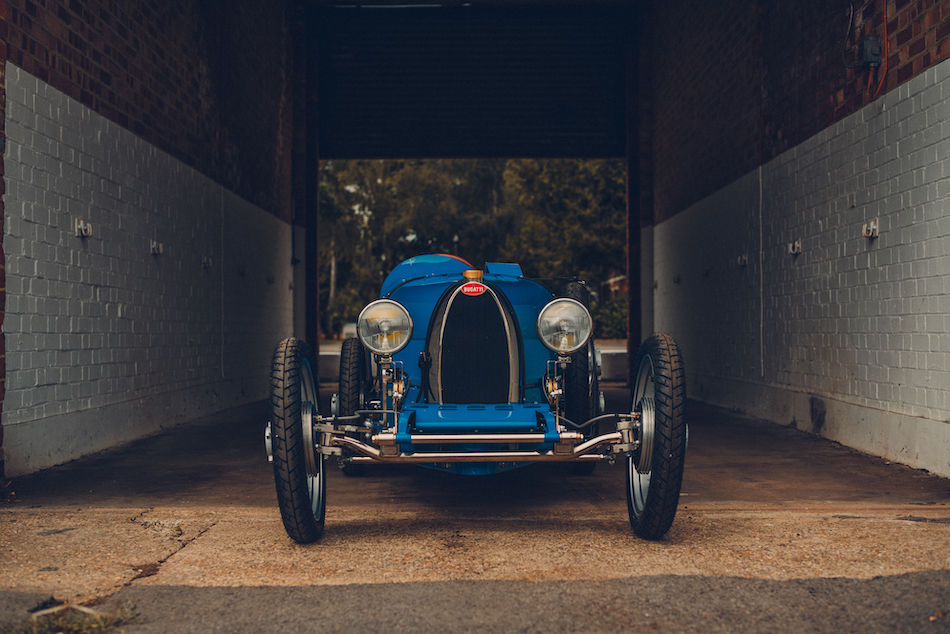 Appealing to enthusiasts old and new
“When you first sit in the car and look at each tiny detail, it reminds me in some ways of the first few months with the Chiron. You get the same feeling walking around the car, as everywhere you look there are beautifully engineered solutions and design details that really are quite amazing” says Andy Wallace, Bugatti test driver and Le Mans winner. “It would be easy to create something like this with a quarter of the quality, but that’s what’s so brilliant about this car: it’s absolutely top-of-the-line, a work of art on wheels.”

“In its most powerful mode, when you have the ‘Speed Key’ inserted, the Baby II is a very fast car. It’s quite impressive and brilliantly fun. You get a lovely feel of balance, it handles just like the original Type 35 and the regenerative braking is a very cool touch. It’s truly an authentic Bugatti, there are no questions about that.”

The Little Car Company CEO Ben Hedley said: “To develop the Baby II we had to walk a fine line. We wanted to pay tribute to the original Bugatti Baby and Type 35, but also wanted to integrate modern technology and make it fun to drive. We are delighted todeliver the hand-built Baby II to customers and allow multiple generations to share the joy of driving. We believe that the vehicle is something really special, delighting collectors and car enthusiasts around the world. As a counterpoint to Bugatti’s production car world speed record last summer, we have developed a vehicle which you can enjoy at much lower speeds with your children and grandchildren”.

With the Base model starting at €30,000, the Vitesse at €43,500 and the collectable Pur Sang topping the range at €58,500 there is sure to be a Bugatti Baby II for both enthusiasts and collectors alike.

If you would like more information on the strictly limited edition Baby II, or would like to apply for any empty build slots on a first come, first serve basis, please visit www.bugattibaby.com.