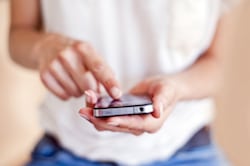 In the not too distant future we may well be using a single, simple smartphone app to do all of the above, and more. Apps are revolutionising our social life, and the persistent growth of the on-demand sector, that focuses on the here and now and instant gratification, proves that consumers are attracted to start-ups promising to fulfil all their needs within seconds. That’s why businesses like Uber, the car service that operates in 53 countries, that don’t aspire to invent new products or goods, but instead focus on changing the way industries work, making our lives more convenient in the process, are doing so well.  The ability to act as middlemen in a market that matches people looking to buy a service with others who are providing it seems priceless. Siri, Apple’s voice-based virtual assistant, promised this practicality but never actually lived up to the hype. Back in 2011, Siri was meant to change the manner in which we communicated with our computers and phones. But that just didn’t happen.

“According to the On-Demand Economy industry organisation, $4.8 billion (£3 billion) has already been invested in on-demand companies across sectors including transportation, payments, ecommerce, health, household services and entertainment.”

Maybe a new app will aggregate the hard work of other apps sitting below it in this service layer, refining and enhancing the users’ experience. Ramzi Yakob, a strategist at TH_NK thinks so, expecting increased alignment, as opening app after app simply won’t do. He foresees that a messaging user interface will be the main way we use these services in the future as texting is a medium in which we’re all already confident. We will no longer have to go through app trays to locate the right one and then through numerous layers of options to navigate a selection. Downloading an app and choosing some virtual buttons may be easy, but sending a text message is easier. Consumers will benefit hugely from this, simplifying and streamlining the user experience.  London has reaped the rewards of a cab-hailing app that has joined forces with a catering chain to provide lunch on moped in the capital. Gett, a transport app, has affiliated with Chop’d to distribute salads from its outlets, in a measure to deviate away from allowing users to just order taxis. Getts founder and chief executive said future on-demand services could include “Gett Pizza, Gett Sushi, Gett Grocery, Gett Wine, Gett Flowers, Gett Dry Cleaning and Gett Plumber”. Everyone gets what they want quickly and effortlessly.

According to the On-Demand Economy industry organisation, $4.8 billion (£3 billion) has already been invested in on-demand companies across sectors including transportation, payments, ecommerce, health, household services and entertainment. Do you hate running around organising your household and get stressed about your weekly tasks? Meet Alfred – the Uber for chores. A report in September from’ gadgets e-tailer’ Appliances Direct revealed that 41% of British people would invest in tech help with their housework. Alfred turned its contractors into full employees in 2014, adding up to 30% to the total cost base.  Who would have guessed the huge impact that smartphones would have – evolving into the ecommerce channel of choice by 2015. The rapid improvements in design, connectivity speeds, and interfaces have taken mcommerce mainstream and apps are taking centre stage.

Combining talent and technology is fundamental and life in 2015 has become increasingly on-demand. One thing is for sure – we do not need any more apps to add to our already congested phones. The secret to success is new tactics to get jobs done, with less apps. This may make the Internet thrilling again but by applauding these apps, which make life a bit easier for the ‘time poor’, will we notice and miss the lack of human resource? The solution is in the balance. Companies that can maintain a good equilibrium of people and technology will simultaneously please consumers while allowing the on-demand marketplace to become more efficient.

The growth of the on-demand economy influences almost all facets of our culture: how people live, eat, travel, entertain and work with research by Intuit showing that only 13% of working Britain believes that they will be employed in a traditional occupation in ten years’ time. The gig economy is going nowhere, and for many of us this means more convenience, more choice and more time.

Alfred – any chance you could you do my washing?