The development of safe, effective vaccines and a weak U.S. dollar solidify our constructive view of emerging market equities, especially Asia (ex-Japan). At the same time, we think Asian bonds provide an attractive yield pickup versus those in developed markets.

After a long, difficult year the development of COVID-19 vaccines allows us to start 2021 on a note of optimism. While much of the vaccine newsflow has focused on the U.S. and Europe, we think it will provide a shot in the arm for emerging markets (EM) as well.

According to the Organisation for Economic Co-operation and Development, emerging market Asia will top the economic growth leaderboard in 2021, thanks to China, which is expected to grow eight percent in 2021, while India should come in just under that at some 7.9 percent. Latin America is likely to lag, with Mexico growing 3.6 percent and Brazil an even more meager 2.6 percent. 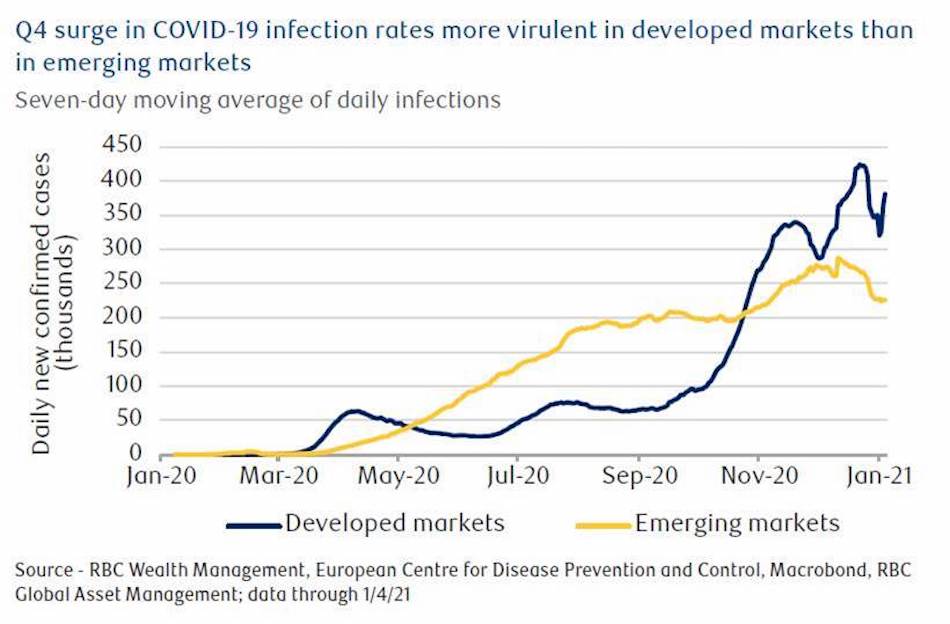 Vaccines—Good news for EMs too
One can be forgiven for thinking that as the vaccines are initially rolled out in advanced economies, EMs stand to lose out. But that is not necessarily the case. Many EMs rely heavily on exports: for Thailand, South Korea, and Turkey, they account for a hefty 60 percent, 40 percent, and 33 percent of GDP, respectively. As the global cycle picks up, these economies should benefit. Thailand, Mexico, and Turkey, which generate 23 percent, 16 percent, and 12 percent of GDP, respectively, from tourism, could enjoy an incremental recovery on the return of freshly vaccinated tourists and the resumption of air travel.

In early 2020 there was widespread concern the COVID-19 outbreak could spark a new EM financial crisis, producing a wave of defaults and devaluations. These fears have proved overblown. Thanks to aggressive actions of policymakers and the International Monetary Fund, that situation has been avoided. Vaccine rollouts in EMs should further underpin the EM economic recovery, even though those rollouts will happen later than in developed nations. Moreover, RBC Global Asset Management (GAM) points out that emerging markets have as a whole spent less than five percent of GDP on COVID-19-related fiscal stimulus compared to about 30 percent for developed markets (DM), leaving room for further fiscal stimulus should it be required.

Constructive outlook for EM equities
We are constructive on EM equities, and particularly the Asia ex-Japan region whose weight in the MSCI Emerging Markets Index has grown since the China A shares were included at the end of 2019. China, Korea, and Taiwan now make up more than two-thirds of that index.

A cyclical upturn, strengthening EM currencies, and undemanding equity valuations underpin our stance. EM equities tend to outperform when global Purchasing Managers’ Indexes, gauges of economic activity, increase thanks to companies’ high operating leverage or high fixed-cost base, and because of the pronounced exposure to cyclical sectors, which account for some 50 percent of the MSCI Emerging Markets Index.

Moreover, historically, there has been a distinct positive relationship between strong currencies and equities. RBC GAM found that since 1988, EM stocks have generally risen when the U.S. dollar declines and as EM currencies strengthened. The reverse holds true. This occurs because a stronger national currency makes it easier for EMs to cope with heavy external debt loads, which RBC GAM estimates at around $5.4 trillion (denominated in U.S. dollars and other DM currencies).

“For China, we believe the current valuation looks fair, with the onshore index, the CSI 300, trading at 14.7x the consensus forward earnings estimate, in line with the five-year average.”

Strong EM currencies + high Asian yields
The prospect of a weaker U.S. dollar is important to our constructive view on EM. Since the peak of the COVID-19-driven financial markets crisis in March, the U.S. Dollar Index has weakened by some 12 percent as fears for the global economy have receded. Dollar weakness could persist into this year according to consensus forecasts. Ultralow interest rates have made the U.S. dollar less attractive, while more predictable trade policies under a Biden presidency could further reduce the financial world’s need for a “safe-haven” currency. 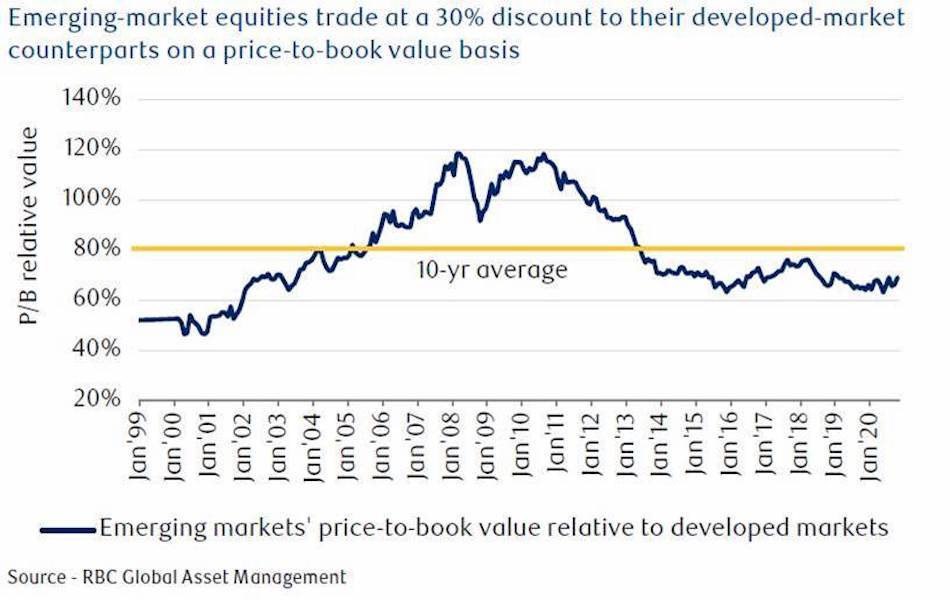 As investors gain confidence in the global economic outlook, they are once again seeking riskier, higher-yielding assets. Q4 2020 looks as though it will have been one of the strongest quarters for inflows into EMs since 2013. According to the Institute of International Finance , non-residents’ portfolio flows totaled some $76 billion in November 2020, significantly over the prior month’s $23 billion, and achieving in only two months a level similar to total Q3 inflows of an already high $107 billion. These capital flows are likely to continue as EM currencies are undervalued and EM government bond yields are higher.

According to our national research correspondent, EM currencies are nearly as undervalued as they were during the Asian financial crisis of 1998 despite some countries’ balance of payments surpluses being close to a 20-year high. In addition, the average interest rate on EM local government debt compared to that of the U.S. is significantly higher, even adjusting for inflation. To illustrate, the JP Morgan Emerging Markets Bond Index Global Diversified, which tracks bonds issued by sovereign and quasi sovereign entities yields some 350 basis points over U.S. Treasuries. This higher-than-normal spread should attract foreign investors.

There is another important development. Chinese government bonds will be included in the FTSE World Government Bond Index as of October 2021. This reflects China’s ongoing progress with market reforms and increased access for global investors. China is the world’s second-largest bond market with some $16 trillion outstanding. According to our national research correspondent, foreign investors own only three percent of Chinese government bonds against a benchmark weighting that could potentially rise to approximately 15 percent. It would be reasonable to expect there will be stronger-than-normal institutional buying of Chinese government debt in the months leading up to the index inclusion.

Asian bonds provide what we believe is an attractive yield pickup versus developed markets. For investors willing to withstand higher risk, there are selective opportunities in EM bonds with yields of as much as 6%–8%. We caution, however, that the ride may not be a smooth one and investors need to be nimble and selective given heightened idiosyncratic risks amid COVID-19 challenges, persisting trade tensions, and rising debt burdens.

Parting thoughts
Risks to this constructive outlook for both EM equities and debt would include a more difficult-than-expected vaccine rollout and/or a take-up that’s too low to allow social-distancing measures to be relaxed in both developed nations and EMs. Perhaps less likely would be a decision by the Federal Reserve to tighten policy sooner than expected. Countries that have ratcheted up debt to finance government spending, such as Brazil, would be particularly vulnerable, in our view.

Overall, the prospects for EM equities appear attractive for 2021. They’ve had a good run recently, surpassing January’s 2020’s high, and the MSCI Emerging Markets Index is up 67 percent since the March lows, in line with the gains generated by the S&P 500. Better entry points are possible, but on a one-year view, we are positive on the asset class, with a preference for Asia (ex-Japan), and China in particular. Having weathered the COVID-19 crisis more successfully, this region’s finances make it less vulnerable to an eventual Fed tightening cycle.